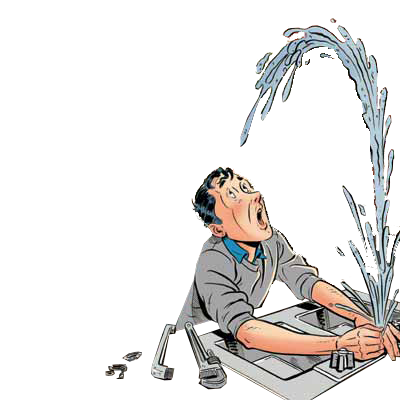 Ever had an electrical problem and couldn’t solve it because you did not want to get in the way of an electrical shock? An electrical shock might be fierce but few people take their time to think of what would happen should they try to fix a plumbing problem and in the event, the whole system goes haywire. Apparently, people tend to think that plumbing problems do not pose much of risk which is the reason why so many opt to put on a plumber’s hut and do it themselves. Truth is, you might eventually call an emergency plumber in a wet T-shirt whereas your kids and wife scamper towards safer quarters.

Plumbing is an interesting job and most professionals in this field just find it important to keep a journal on their most thrilling experiences. A dad who specializes in IT gets home in the evening and the wife reports a leaking faucet in the kitchen. Instinctively, the IT professional decides that it would not be worth-while to pay, just because a faucet is leaking in their kitchen. What happens next? He gathers some crude tools from the garage and gets ready to get even with the leak which will obvious be done in haste since he wants to get back to his laptop or watch some TV. Before he can even realize it, he is dealing with a gush and even then decides that it is not much of a problem. By the time he calls in an emergency plumber London the level of water is up to his ankles and he can’t even remember what the initial problem was.

So, how can you save yourself from such nightmares? The best way is to erase plumbing from your list of DIY tasks. You might be lucky enough not get a wet carpet and some floating utensils but most of the people who try to solve this kind of problems on their own make them worse. The emergency plumber London will save the day by fixing the problem but it will obviously take longer than it would have done if you did not decide to tamper with the system. Additionally, you might have to replace some damaged items in the house and not to forget that the plumber will probably ask for more.

DIY plumbing might be illustrated as a great way to save money but unless you are lucky, you might end up spending more. A good option would be calling a professional the moment you experience the slightest problem with your plumbing. If you plan to embark on a remodel project and especially those which involve the bathroom or kitchen, it would be important to call in a plumber too.

Subscribing to the services of a company which provides emergency plumbing services should not be considered a waste of money but rather as an investment. Those which are reliable have a customer care support desk which listens to alerts 24 hours in 7 days and are capable of answering to a call irrespective of the time.

Related articles: When DIY Can Lead To An Emergency Plumber Situation.