What to do with Frozen Pipes

What to do with Frozen Pipes, the cause of a burst pipe 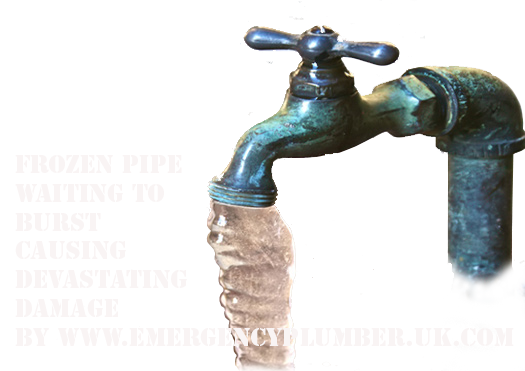 What to do with frozen pipes, the cause of a burst pipes.

When winter weather comes around every year, there’s always going to be a certain amount of trepidation. Storms can cause power outages, ice can make the road unsafe for driving, and the freezing cold temperatures are just downright uncomfortable. Of course, if you live in an area that experiences harsh winters, then you have probably experienced some kind of plumbing issue associated with the cold. Having a frozen pipe is one of the major things that can lead to much larger plumbing emergencies. While it’s nice to have an emergency plumber on hand to help you with any issue you might be facing, it’s also nice to be able to fix the problems yourself.

In general, frozen pipes are caused by temperatures that drop below freezing. Of course, this will cause the temperatures inside the pipes to become exceedingly cold. When the water in the pipes starts to freeze, the pipes themselves will soon follow suit. Obviously, this could all be happening while you’re counting sheep in your comfortable bed. But, when you wake up in the morning, you might find that that the shower doesn’t have any kind of flow leaving you incapable of taking a nice hot shower.

Of course, the problem might become more urgent if you happen to go about defrosting your pipes in the wrong way. Indeed, an emergency plumber might have to come save the day if you improperly heat up your pipes. It might sound like a simple proposition, but you stand a lot to lose if you use something like an open flame. This is because the flame will be too hot and too concentrated on a particular area. Although the pipes might start defrosting, they will also begin to expand, which will make cracking even more likely leading to a burst pipe.

If you really want to defrost your pipes properly, you might think about using hot water (if any is available) or even a hair dryer. These options won’t put undue stress on the pipes and they will allow them to heat up gradually. Unfortunately, sometimes the pipes may have already cracked due to the expansion caused by the freezing. If you notice the crack beforehand, you’ll probably want to contact a plumber to help you out. This is generally a job that you can’t do on your own, because it involves replacing pipes.

You can avoid that call to the emergency plumber altogether if you happen to put insulation around the pipes beforehand. It’s always a good idea to think ahead and prepare for anything that might not go as planned. Insulation can wrap around the pipes to ensure that they don’t feel the harsher effects of the cold temperatures. In any event, it’s always a good idea to take preventative measures when it comes to your plumbing.

Other related stories you can find on burst pipes and the devastation it causes. This was inspired by an emergency plumber in Coventry where the engineer had to go out and use a hairdryer to get rid of any cold pipe that had frosted up.