Why do I have to bleed My Radiator? – Bleeding Central Heating Radiators explained 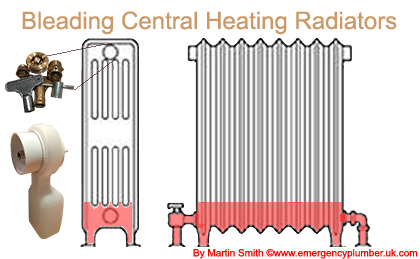 Here are the top 14 questions asked by the public when it comes to bleeding central heating radiators. These may not be in order.

Why do we have to bleed our central heating radiators

The old fashioned way for when bleeding a radiator was first invented is that there would be a fitting at the size between 10 to 15mm that you would take out in order for the water pressure to push there air out until full and then very quickly the hole would then be covered up by the fitting. As technology got better then the valve was easy to use and the was no more need for the pair of grips and the bleed key could then be used.

Why do we get air in our central heating radiators

This is quite a common plumbing situation where the bleed valve goes missing and an emergency plumber is then called out. The only way you have is to either just undo the bleed valve a couple of turns and be patient for the bleeding process to take place or to place a litter jug and a big plastic sheet cut to shape under the radiator valve. Some people may think that putting a big plastic sheet of plastic under the radiator is a bit extreme however the extreme part starts when the bleed nipple misses the jug for some bizarre reason and lands directly below.

Why is my radiator corroding at the bleed valve, is there a way to prevent this

The reason why you have your radiator corroding at the bleed valve is because the mix of air, water and metal has a reaction. If the bleed nipple is not tightened up correctly and you have a very slow weep that is not seen, then the process of corrosion takes place, corrosion can also start from the inside out where the radiator has air inside but also mixes with water and metal. Unfortunately once the corrosion starts, it then spreads and absorbs the any damp air and spreads until there is no strength in water holds the central heating water in and leaks water resulting in you needing an emergency plumber.

The best type of radiator bleed valve we can have would be a radiator valve that self bleeds, however due to the cost of these type of valves is the reason we don’t have them. Another issue is because there is not enough feed back on self bleeding radiator valves from problems occurring. As up to now we can say it should be ok if you were to have them around your home but with no guarantee with to what happens if they were to ever go faulty.

How can I loosen a bleed valve that is stuck 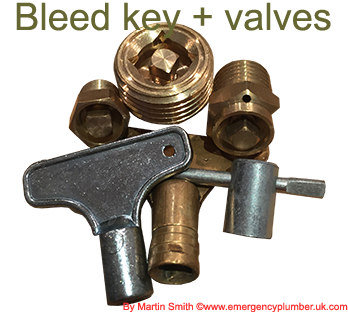 If you would like to loosen a bleed valve that is stuck then the best time to do this is when the radiator is at it’s hottest or you may want to place some liquid that fights against corrosion. Depending on how bad the valve is stuck in place, you should then with a tightly fitting bleed key undo the bleed nipple in an anti-clockwise movement and undo the bleed nipple.

My bleed nipple has broken, do I have to buy a new radiator or is there a way to solve this problem

Can I bleed the radiator when the central heating is on

Is it better to fill up the central heating system at mains water pressure or at gravity fed water?

What is the best radiator with the best bleed valve?

Could you say the best type of bleed key is the bottle bleed key? 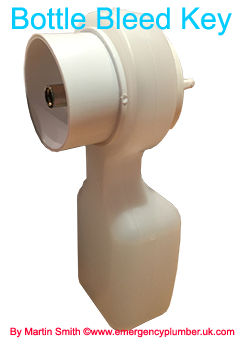 If you are one of those who worries about getting water over the floor then there are a few options you can take, first Martin would place an old towel over the floor for precaution, secondly you could use the bottle bleed key that lets you know how much water has come out of the radiator before you decide to tighten up the bleed valve.

Another name for the bleed valve is the bleed nipple but due to laws we are no longer aloud to call it this as some people may find this too sensitive.

If your a customer that would like to use a professional plumbing and heating engineer and feel that you have plenty of knowledge when it comes to bleeding central heating radiators then please feel free to give us a call as we are a national plumbing emergency service working 24 hours a day, 7 days a week. If your a plumber or gas engineer looking to join us then please visit our plumbing register.