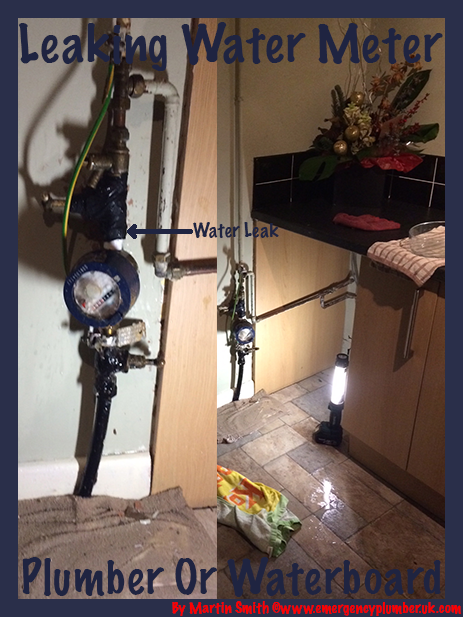 Martin Smith explains about the leaking water meter repair problems and what are the procedures that should be taken. This type of leak is not a common water leak but again, like most other water leaks, it has to be dealt with as professional as possible.

In the picture to the right, curtsey of Thomas Sweeney from TS Plumbing Services, an emergency plumber Wirral & Chester has sent us a few pictures to help us with the leaking water meter. The water leak was coursed by an appliance coming out and like most things that are not thought through, the water meter was in the way. Just below are some common question that have come about for information that occupants and emergency plumbers would like to know when there is a leaking water meter.

Leaking water meter information and answers to your problems

If you have a leaking water meter and don’t know what to do, then carry on reading, as we will explain as much as we can due to our experience. In the picture above, the customer had contacted an emergency plumber Wirral as there was about to become plenty of damage to the kitchen. The customer had called United Utilities first of all and they explained to call an emergency plumber Wirral. The customer had called Martin Smith who had recommended Thomas to go and fix a leak to the water meter. Thomas was also advised that the water board will also be there to watch what was happening. Due to the lack of knowledge on what the procedure were, Martin took it upon himself to make a few enquiries to United Utilities to find out what the leaking water meter procedures in the house were.

As explained over the phone by the water board, if there is a leak anywhere on the meter, which includes the nut connecting the pipe of the water meter, then the water board will come out as an emergency plumbing call-out. This does not include an immediate response to the on call engineer in the area, which may also be busy. However if the occupant feels that the damage out-weighs the time of arrival of the water board, then an emergency plumber can attend to either stop or fix the leak going to the meter. If the leak is un-fixable, the only option for the plumber would be to cap of the mains water supply to the meter and wait until the water board arrive.