Most Common Water Leaks In The House 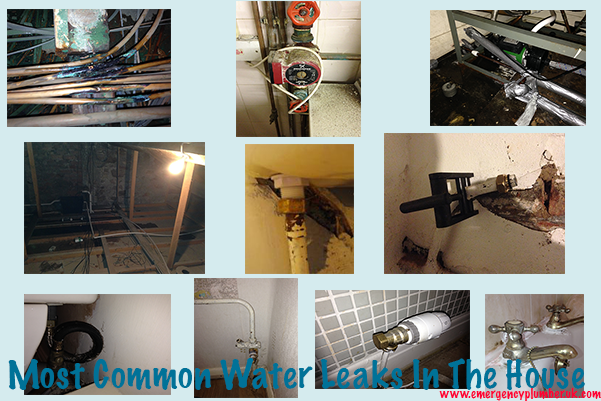 Martin Smith an emergency plumber believes the most common water leaks come from the dripping tap and has been very common since taps were invented. Taps can leak because people don’t turn them off well enough. In some case, over tightening a tap can cause the tap to start leaking water. The harder you turn a tap off, the quicker it may develop a leak due to the wearing of the tap washer. A quarter turn tap can also develop a leak due to the water being too hot or some debris getting stuck in the quarter turn tap valve.

The overflow to the most commonly used valve would be the float operating valve is leaking, this is regarded by Martin as the second most common water leaks that can come about. Again it works of a rubber washer and a cone pushing against each over, hard bits tend to get stuck in the washer causing the valve not to shut correctly or the washer to wear. Every time any water is used from the tap that uses gravity fed is always in danger of developing a water leak. As combination boiler are becoming more popular, there will not be as many about as there would use to be.

Toilet inlet pipe to valve weeping or pouring out is another common leak. This is due to the toilet moving ever so slightly and is causing a strain on the pipe to the toilet. Having fibre washer is not always the best as eventually the fibre washer can weaken until it develops a water leak.

A leaking radiator valve is very common when it comes to October due to occupants turning the radiator on for the Winter. Due to the valves being close through the summer they tend to stick. If dealt with wrong, they can cause a serious central heating water leak.

Shower hose are quite often reported for leaking but most common when shower hoses go passed there life expectancy which is long in most cases.

Pumps are getting better as the years pass by but is still a common place to find a water leak. Water leaks on pumps are due to vibration either when the central heating is on or the power shower is working. Check what the best central heating pumps or the best shower pumps.

Boiler can leak at almost any age, the cheaper the boiler the more likely it is to leak. There are so many parts in the boiler that can go wrong and starting to leak but can also be a very costly job.

Water leaking from under the bath

I common call out to an emergency plumbing job is, water leaking from the bath and normally happens in the morning. Sometime when a bath leak, it’s not until a few hours later you will find it coming through the ceiling.

A leaking gland is a common water leak, as glands get older they tend to get a little dirty, the gland nut tends to stick to the handle rod. When the water is turned back on, the gland nut then un-tightens, this causes leaking water to pass through and can be simply cured by tightening the gland back up but is not a long term fix. The best advice here is to grease internally and externally.

Leaking Water Underneath The Sink

Leaking water under the sink is also very common. This is due to the storage of products under the sink and quite commonly the pipework is being knocked.

If you have one of the most common leaks in your home, it is advisable to make sure there they are fixed by an experience DIY plumber or get a profession emergency plumber out depending on how bad the leak is. If you want us to recommend a plumbing engineer, then give us a call on the above contact number. If your a plumber and would like to be one of our recommended engineers, then send us a email to emergencyplumber@me.com.