What is the difference between the cold feed & open vent 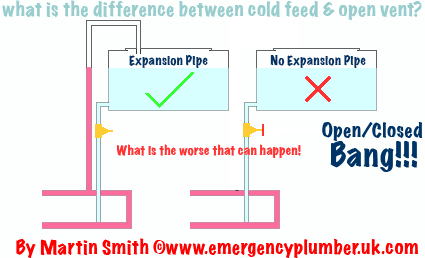 Can I have a cold feed as my expansion pipe

If you had a cold feed used also as the expansion pipe, it doesn’t mean that the central heating won’t work, it just means that you are more open to problems, with a combined cold feed & open vent, where the central heating system isn’t pacifically designed for this. The problems can be small, but feed & expansion pipe combined can also be very dangerous, which is the reason, when you working with the cold feed & expansion it is done in such a way, it is made safe to use at present and in the future.

Why do we need an expansion pipe

Why is the expansion pipe in 22mm pipe

There are a couple of reasons why the expansion pipe is at 22mm rather than 15mm. The first reason why the expansion pipe is at 22mm is because, it is more likely not to block up if the rest of the central heating is at 22mm circuit. The second reason that the 22mm pipe is bigger than the cold feed 15mm pipe is because, the flow is not as restricted and easier to let the water expanding to find the expansion vent pipe. The is only a typical example of domestic plumbing in a 1 to 5 bedroom home or maybe more if the home is to a standard central heating system.

If the feed was turned off and there is no expansion pipe, when the water heats up to it’s maximum, it is in serious danger of exploding, as pressure will get higher and higher.

Why is there a service valve on the cold feed pipe

There are some emergency plumbers that don’t believe in fitting a service valve due to extra dangers, but is handy for any maintenance required. If a service valve is fitted, also known as a gate valve, it must be in such away, that it can’t be turned off by the occupants and only a central heating engineer. This is why you will find on some service valves, no handle, but another unusual fitting over the valve, so that a handle can not be fitted.

When the central heating water is getting too hot, what cools it down

Yes it is possible to have a combines feed & expansion, however, the central heating has to be designed specially, so that it can take a combined cold feed & open vent. Due to the extra cost involved, for this reason it makes more sense, to have a separate feed and expansion.

Why do we get cold feed and expansion problems

If you would like an emergency plumber to deal with your cold feed & open vent problems or known as feed and expansion, then feel free to give us a call and we will recommend an engineer to visit your home. If your an emergency plumber, that has experience with the F&E, feed and expansion, then please have a look at the plumbing register. If you feel you can add to our cold feed and open vent or disagree with what we say, then please send us an email to emergencyplumber@me.com