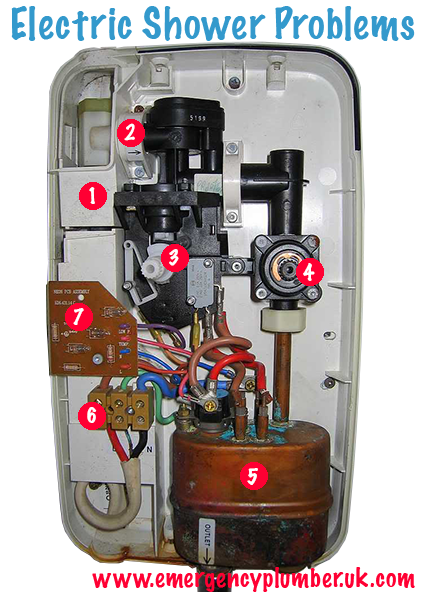 In the picture to the right, the hotspots are pointed to areas that have electric shower problems and can be common water leaks or just not working resulting in the need for an emergency plumber. In each step Martin will explain each hot spot and common searches made by the public to what the problem can be with there electric shower. We will give you the common questions then we will answer them in the best way we feel.

If the trip to the shower goes off when you turn the shower on, then this is most likely because there is either a detection of water in contact or there is a neutral to live contact. If there is any type of bad contact on the electric wiring causing the wiring to heat up, then this can be another way to cause the electric to trip off.

I can smell burning from my shower

If you smell burning from the shower, this is most likely going to be wiring problems or a problem from the above paragraph.

I have power to my shower but not coming on

If you have power to your electric shower, but is not coming on, this can be either an electrical contact problem or the PCB as gained a fault which you may need to replace. We have a simlar article to this, which is about my shower not working.

The shower on my wall in the bathroom is loose

If you have water leaking from your mains water feed in your bathroom, this is possible the compression nut or (read up in the paragraph below).

If there is water leaking from the water inlet pipe and the pipe is loose. This is most likely due to the plastic connection as shown in the diagram above (2) is broken. If this is broken then you may need to either order an new one from the manufactures or replace the complete shower.

My heat settings isn’t making any difference to my shower

If the heating handle or switch is not making any difference to the shower, then this is most likely going to be either an electrical problem or the internal valve is broken of which you will need the complete shower replaced.

The on an off button to my shower isn’t working

If the on and off button is not working on the shower, then this may be an easy fix as the part can be ordered and easily replaced. At the worse, the electric shower can be replaced

The pressure to by shower won’t turn

If the water pressure handle to the shower won’t turn, then this may be due to a lime scale or muck build up causing the shower valve to fur up and not turn on, this may result in replacing the shower as the most likely hood is that there will be break well trying to turn the valve.

There is water coming from the shower

If there is water coming from the shower and not the feed pipe, this can be a number of internal plumbing problems within the electric shower, which then means you will need to replace your electric shower unless it is a simple nut or washer that can be fixed.

My shower hose in the bathroom is leaking

If the shower hose within the bathroom is leaking water and there are washers in both ends of the hose. It may only need an hand tightening up, otherwise it will be better to just buy a new shower hose and shower head.

Most electric showers require a minimum amount of water pressure to pass through in order to turn the heating switch within the shower so that it heats up. The only remedy for this is to find a better source of water pressure.

If you have electric shower problems and the shower has been correctly fitted including the isolation valves, the best thing to do before calling an emergency plumber on a call out, is to isolate the water by quarter turning off the isolation valve and turning the trip switch off on the mains electrical board for the shower. This will no longer make it an emergency plumbing issue other than requiring a shower for cleaning purposes.