Gas Engineers Fitting Service & How Much Should A Gas Engineer Charge 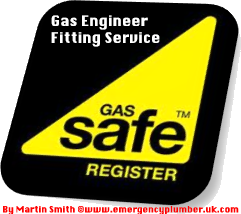 A gas engineer can charge between £30 to £100 per hour in the day depending on the size of the company, area, reputation and the response time. Martin Smith runs a large organisation of engineers with a great reputation for his reputation, specially when comes to calling an emergency plumber. If you were to book an engineer through Martin Smith on an hourly rate then the current cost would be at £60 based on a minimum of 4-hours work (option 1). If any the time limit was any lower then the cost for a gas engineer can be based on £70 per hour between 2 to 4-hours (option 2). At the minimum of 1-hour then the rate for our company would come in the cost at £60 for 1-hours labour plus a £39 call out fee by following our emergency booking services 8am to 4pm, Monday to Friday. The daily rate for a self employed gas engineer after a survey was found to be in-between £150 to £500. Our rates based on a daily cost are 1-days work at £450 (option 3), 2-days work at £400 per day (option 4) and 3 or more days work at £350 per day onwards option 5, 6 or 7). A weeks work would be based from options 5, 6 or 7 but on a weekly charge of £1750 (option 8).

If your looking to pay the gas safe engineer only for the amount of days he/she works at the property in question rather than a quote then this isn’t a good idea unless it is being done at a very cheap rate. The reason it isn’t a good idea for a gas engineer to work of a day rate is because he/she may only do 4-hours work, where if there was a quote of a days rate in question, it is in the benefit of the engineer to work at a good rate and finish earlier but without compromising the quality of the work involved.

What is the average rate of a gas engineer

The average rate for a gas engineer in the UK is about £50. Having a gas engineer at the rate of £35 per hour doesn’t mean that the quality of work is lower, it all depends on the area where some parts of the UK have low income and some areas of the UK have a high income for example: calling an emergency plumber in London.

Why does a gas engineer charge more than a plumber

A gas engineers days work is based on an 8-hour day, however, when giving a quote for a days work, the engineer may be finished within say 5 to 6-hours or if the gas engineer in question brings his apprentice or co-worker, then the work may be done within 3 to 4-hours. If a gas engineer quotes for a weeks work but does the job within the 2 to 3-days, this could be due to co-workers, maybe up to 2 working alongside him/her.

If a gas engineer does his job quicker than he quoted for, should the cost be reduced

If the work is done quicker that has been quoted for then the answer to should the engineer cost be reduced, then the answer should be maybe! The reason maybe has come in to it, should be, if the work quote for has not been fully complete due to the customer deciding that the work no longer needs to be done, then this should be negotiated before the completion of work, however every job is different and has to be seen as reasonable. If the work quoted for has been done quicker, then all the costs quoted for should be fully paid as Im sure, if the work was to take longer, there would be no extra costs involved.

When work is classed as an estimate, then it is easy to change the costs just like your working on an hourly rate but when quoting for a job, there is no extra time allowed to be added for costs, however, if for example, floorboard were to be lifted and there was rotted wood that was virtually impossible to see upon the time given for the quote then this is classed as reasonable extra charges involved but must be agree with the customer before commencing or further costs involved for investigating further. Another example would be, a radiator is being moved but upon moving the 2nd hand radiator, it was not to work again or maybe a disturbed pipe along the central heating was to start leaking, investigation costs would be involved but also further quoted would also be at an extra charge. The point we are making is, a quote can only be given under what can only be seen but not guess work. It is also advisory for a gas engineer or plumber to advice on further work that may be required but again has to be seen as reasonable.

Can a gas engineer be considered too cheap or too expensive

When getting a quote on the gas engineers fitting service, it is always a good idea to find reputation and establishment. A large company would be found to be expensive and more reasonable when it comes to a higher quote, where a gas engineer just starting of with not as much experience would be found to be cheaper. A gas engineer who charges lower costs is found to be more of a risk, where a larger company that has a great reputation has more too loose by keeping up the reputation may sometime be a good idea to go with. In most cases, you pay for what you get, but in some areas from time to time, what we may see as a high quote but with a high risk factor, may be classed has the gas engineer being too expensive. Our advice would be to do your home work from company reviews to company reputation.

As mentioned in the paragraph ‘Is it ok for a gas engineer to charge more if the work was to take longer than he/she quote for‘ but mentioned again in so many words. It is most likely that the cost would be as quoted, but in rare instances there may be reasonable hidden costs. Advice: have a chat to whom your getting the quote from.

A gas engineer working self employed for himself would charge a lot more than a gas engineer working for a company for example, the self employed gas engineer has double the costs and business expenses. On the national statistics on average, a small company such as a one man band, it is found that only 40% of a company income would result in personal wages. This would mean that a self employed gas engineer, if earning £40 per hour, would only claim £16 per hour as personal income. If you are working for a boss you may find yourself earning as a gas safe engineer between £10 to £15 per hour. Due to the complications involved and risks in running a company, this is the reason why your may find, gas engineers charging more than £40. Some would say £40 is excessive but when you take into consideration the costs involved in the running of a business, then £40 would be classed as considerably cheap to most.

What is the guarantee on the gas engineers fitting service

A standard guarantee by law unless stated on the invoice/receipt would be 12-months for a gas safe engineer. Again, this has to be seen as reasonable as bad workmanship may go beyond the 12-months.

When booking in the gas engineer, should I have to pay a deposit

Some small companies would take the risk in taking on jobs without paying a deposit, our company can be seen to charge a deposit depending on the job in question.

Martin Smith prides himself on the quality of information and reputation, if you would like to use our service then please click on the booking box and book in the work you have been quoted for, if you are a gas engineer that is looking to join our network then please visit out plumbing register. Just below we have some similar related articles that may be of use to you.

Related article you may be interest in from reading this article about the gas engineers fitting service.