If you have an hot water airlock problem but no way to understand on how this happened or how to get an airlock out of the hot water system then carry on reading below as Martin an experienced emergency plumber in Manchester explains all the cures. Just below we explain the most asked questions the further below we answer all the questions that people are looking for. 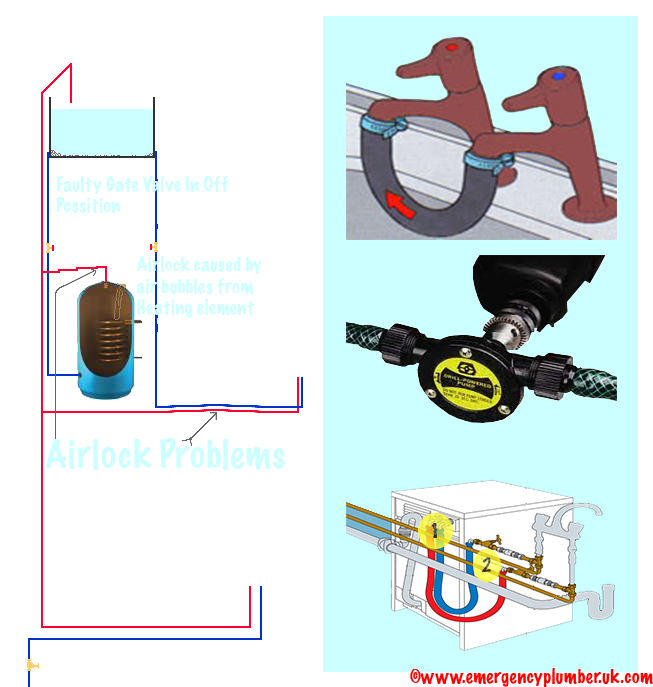 How can I get an airlock out of my hot water

If you have an airlock in the hot water then the most simple way to solve this is to cross the hot and cold water over as shown in the picture above on both of the taps.

In some cases you may have no cold water coming out of your tap and you will be unable to cross over the hot to the cold and run enough water pressure to push the airlock out of the cold water. The complicated option which you may not be able to do due to the type of tool that is require is a manuel pump as shown on the picture which is attached to a drill. The other option may be to put a black over the expansion pipe, connect the gravity fed cold to the hot and then the cold water mains to the hot making sure all taps are running for at least a minute. Another option to a hot water airlock may be to connect either the outside tap or the mains cold water tap to the gravity cold by a long enough hose pipe.

I have tried to get my airlock out of my hot water but I have failed, is there any other way

If you fail to get your hot water airlock out of the hot water taps by all means of crossing the cold water mains with the airlock in question, then there may be other reasons that the water won’t come out of the tap. There may be something that has made it’s way in to the plumbing system such as fibre glass from the attic or you have an old storage water tank that is full of much and made it’s way down the pipe system. You have recently turned of the gate valve and once turning it back on without realising, the gate valve has gone faulty. Maybe the tank has run dry and not filling up due to a faulty ballcock in the hot water tank. Any of these reason it may just be better to call a plumber to come out and resolve this so that you can get on with your normal life without stressing out whats going on.

There is no water coming through my tap, is this an airlock or my mains water supply

Using a washing machine hose to get a hot water airlock out of the hot water is in most case the best and easiest option as this ensure the best flow of water as long as the hose connections are easy accessible. You may need to pull out the washing machine in order to solve this problem if the hose connections are not under your sink. In very unusual occasions are that there has not been much thought in to the plumbing and the connects are not in a good place to work on even if you do pull the washing machine out, you will just have to find another alternative.

In most cases, it will take about 3-seconds depending on the length of the pipework, but if this was to get more complicated then it may take up to about a minute. Martin Smith an experienced emergency plumber in Manchester once took on an emergency in a mansion house where the airlock took about 2-minutes for the water to run through and for the airlock to come out.

I have no water coming through my taps, could this be an airlock or a stop valve problem

As mentioned in one of the other paragraphs above about an hot water airlock, it is known that sometimes a customer/occupant finds out she/he has no water coming through the taps when someone else turned of the gate valve. This may just be a simple turn on of the gate valve as long as there are no further faults with the gate valve that is and all working order. If you do struggle then you may just need to call an emergency plumber in Manchester or anywhere else, all depending on where you live.

The type of tools you require to get a hot water airlock out of the hot or cold gravity fed water system you will require are a pair of grips, flat head screw driver and hose connections with hose pipe. You may also need a manuel/automatic pump and a drill. Other tools and materials that come in handy are a 22ml john guest blank, a second pair of grips and a bucket.

What causes an airlock in the hot water system

A cold or hot water airlock can be cause by the tank running dry or air bubbles with the hot water system from a heating system where the pipe work runs up and then back down causing the air to trap and not vent out as to what should be happening. It can also be common when the pipes under the floor and to no fault of the plumbers, the floor may running un-level and the pipe work may follow. This type of airlock is more unusual but may happen if you run your water dry.

My cold water is gravity fed, can I cross the hot to get my airlock out

My shower has a hot or cold water airlock, how can this be fixed

When a shower or any other similar set up gets an airlock, this is normally due to the pipework going up into the attic and then feeding down with no vent. You may be able to vent the valves above or check that the filters are not blocked. In most case when there is a problem with a shower, this is due to a poor installation. Always check with an experienced plumber that is reliable.

I have water coming out in all taps except for one tap, what can this be

If you have water coming out of all the taps apart from one then the airlock may be more local that you think. The most likely fault when it comes to no water coming out of a single tap is that there is a fault with the valve within the tap however in some circumstance it has also been known that there could be a very local airlock but very rare.

If you have no water coming out of your tap or the mixer shower then sometime this can be down to a filter problem but only a very few taps will have this type of set up and more so in mixer showers. If this is the case, unless you have enough experience to work with plumbing where there is a filter, you may need to call upon an emergency plumber. It is very important you get a plumber that knows what he is doing as this can happen to the best mixer shower in the plumbing industry.

If your an occupant that has any of these problems such as a hot water airlock and unable to solve them then you could give us a call and we will recommend you a plumber whoever your require an emergency plumber in Manchester or any where else in the UK then we can help you.

If your a plumber and reading this article about hot water airlock then you can register with us by making an enquiry at emergencyplumber@me.com