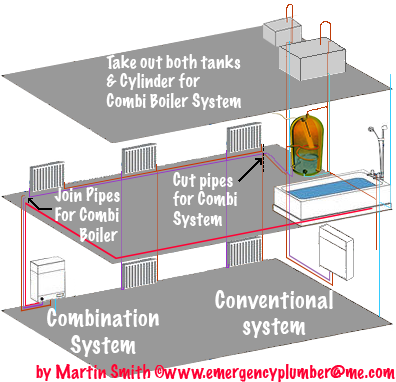 There is plenty of emergency plumbers out there, that believe that, the way forward in life is to have a Combi fitted, however, there are also those who believe in the old fashioned central heating system, where there is more pros than there is cons. Just below is a list of reasons you should have a combination boiler and also stick will the conventional boiler you already have.

Here are all the cons of having a combination boiler

Pros of having a conventional boiler

There are so many occupants that are told by a gas engineer to have there hot water cylinder taken out, without considering if it is sufficient enough. Martin Smith an emergency plumber has been listening to those with so many complaints of when they had there combination boiler and that it takes so long to fill up the bath, where others have praised the fact that they now have a combination boiler and they also never run out of hot water.

What to consider when having a combination boiler fitted is the water pressure coming into the house, how may occupant are in the house and if it’s a big family. Is it normal to have 2 hot water appliances on at the same time. The size of the boiler is also very important as there is those who don’t have enough sufficient amount of hot water and that the water is not hot enough when the pressure is at it’s highest. By changing the whole system, you may also conflict with low water pressure taps installed.

If you have had a bad experience as explained here, then we would like to hear what you have to say on our Twitter. Here is our profile @plumber24hours. If your looking for an experience engineer to give the best advice, which also include sending an engineer over to check the central heating system you currently have installed, then give us a call on the above contact number. If your an emergency plumber that would like to take on these type of jobs and wants to be on our recommended list, then visit the plumbing register. We would also like some over pros and cons of having a hot water cylinder indirect, replaced for a combination boilers.