Leak Coming Through Ceiling From Attic

Leak Coming Through Ceiling From Attic What Could This Be 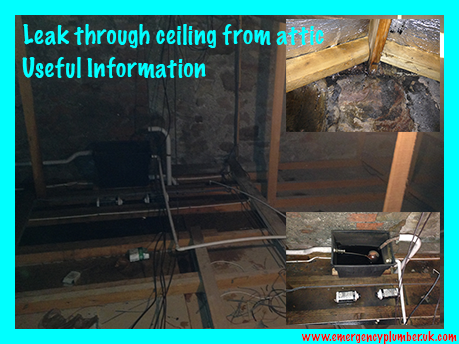 Once Martin Smith had arrived, the first thing that was checked, was the underneath of the ceiling and then the attic. Once in the attic, the plumbing was checked over, but no signs of a water leak, then there was suspicions starting to appear. The over flow from the central heating tank was left sagging, with no evidence of the tank over flowing as the level was at a normal height. Surrounding plumbing pipes with pipe lagging was wet, but the best of the evidence came from the ceiling, where the cobwebs were visibly wet including the underneath of the roof. There was only one thing for this and that was water steam. But why is there steam in the attic?

How does steam get in to the attic

The worse scenario is when the water over boils, causing the hot water tank to split, but on this occasion in the picture, it was the stat that had gone on the boiler causing the hot water to over heat and the expansion pipe to let boiling hot water to pass water and over flow, which is the reason why the overflow had got hot and starting to bulge due to loss off strength as soon as the heat had got to it.

The reason there was no evidence within the tank that the tank was to over flow was because, the water was so hot when the tank had gone back to normal, the hot water mark would of evaporated leaving no evidence. As soon as the steam reached the cold ceiling off the roof, this would off cause steam to change back into water and drip through-out the ceiling.

Most Common Leak Coming Through Ceiling From Attic

The most common leaks coming through the ceiling from the attic would be the float operating valve followed by a burst pipe due to the cold or a joint on the pipe work that may of been knocked at some point. These type of water leaks are easy to find, but also easy to fix if your good at a bit of DIY Plumbing. In every attic there should be an Isolation valve to the tank, so there should be no reason to turn the mains water supply of until the emergency plumber arrives to fix the plumbing problems.

If your an occupant and require an emergency plumber in Darwen or anywhere else in the UK, then please feel free to give Martin Smith a call, a national agent for plumbing engineer of whom we will get you an engineer to you within 30 to 90-minutes. If your a plumber reading this article and would like to join our database of engineers then send us an email to emergencyplumber@me.com