What is the difference between vented and unvented boiler? 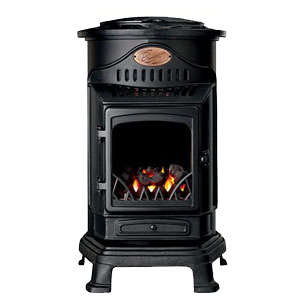 Martin Smith an emergency plumber explains what is the difference between vented and unvented boiler. In the days where there were not many guidelines but enough deaths to sit watching the 6’oclock news and keep your mind occupied with what going on were the day when you most likely have an open fired boiler, rather than the closed room vented boiler. Martin still believe that we are still in those days as the full guideline we aim to target are not met. Just below we give you an understanding of what the difference is between the vented and unvented boiler before you go out and buy possibly what is known as the second hand boiler or a bas bottle open fire that keeps you warm with not the right amount of ventilation. 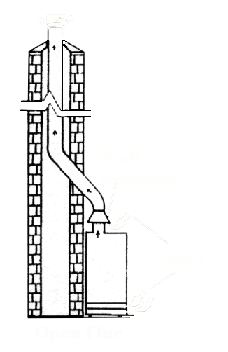 An unvented boiler is a boiler that takes the air from around the room and changes it to carbon dioxide, as most house today, the carbon dioxide is replace with fresh air due to ventilation via the wall ducts and general caps left within the home to the outside. New homes that are being built today are being changed and more air tight the that the air within the home is being limited. For this reason it is more important to make sure when a boiler is being fitted that it meets all the recommend requirements so that the occupants are not breathing in the carbon dioxide that the heater or unvented boiler is letting out. An unvented boiler required oxygen to burn them fossil fuels in order to make energy, what ever in the air is not turned in to energy then becomes carbon dioxide. If we breath in carbon dioxide then the blood levels are starved of oxygen resulting in unconsciousness and then death. This is why it is so important to make sure if we have an unvented boiler that does not carry the safety switch to turn off when there is a lack of oxygen that there is enough ventilation to give us the oxygen we require to live.

What does a open flue boiler do in comparison to a balanced flue? 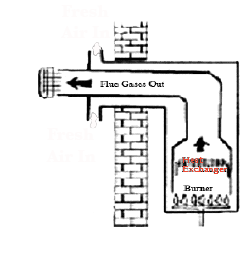 An open flue boiler is a boiler that has a flue going to the outside but does not have the stability to bring in oxygen or a flow of wire coming in to the boiler which again requires a good amount of ventilation within the home as in the picture above. A balanced flue boiler is ok when it comes to a close room where there not the required oxygen for the boiler as the oxygen to burn the fuels comes from the outside via the balanced flue as shown on the picture.

What is the latest type of flue in the technology we have today? 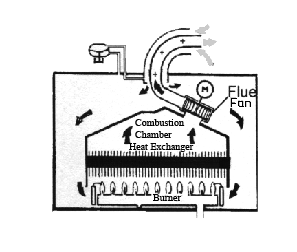 The best type of technology we have today includes the flue and the flue fan. The fan sucks in the air/oxygen, the oxygen is then used to burn the fuels, the carbon dioxide and Carbon monoxide then is pushed out through the flue in order to us getting heat through our home. We have more in the way of technology about the boiler but the main subject about this article is all about the flue. If you require advice from on of our gas engineers/emergency plumbers in Bury or anywhere else in the UK then please give us a call and we will do our best to help you out in need.